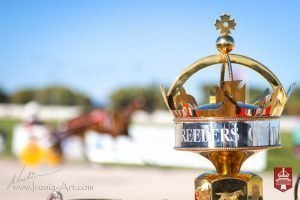 Breeders Crown Finals Night at Tir Prince delivered top stakes racing for the younger brigade, a crop of pacers who promise so much for the future.
Rhyds Shoofly drew barrier 3 with her conquerer from the previous night Brown Eyed Girl one berth out.
John Richardson asked the daughter of Hasty Hall to show a turn of foot which proved decisive in the closing stages when beating Ela Mana Mou by three and half lengths in 2.05.8 with Wellfield Witch third and Brown Eyed Girl fourth.
The winner was paying a handsome compliment to Robyn Camden, who beat the Breeders Crown heroine by seven lengths recently at Portmarnock. The two are set to renew rivalry in the Vincent Delaney.
The Juvenile colts championship looked a vintage renewal but sadly, both Rhyds Star Quality and Teddy Camden were forced to miss the race on veterinary advice.
However, the stable companions Matticulous and Merrington Movinup put on a quality show with the former taking ‘gold’ by a length in 2.02.1.
The Laidler team certainly have some wonderful young firepower with this pair, and on this occasion the half brother to the mighty Miraculous was partnered by Willie Greenhorn, who, amazingly, was driving his first ever winner at Tir Prince.
When Ryan O’Neil broke the news to me I was reluctant to believe him!
Rhyds Mystique drew barrier 1 in the 3-Y-O Fillies Championship after her heat success with the other heat winner Lyons Lememay in 4.
The recent Barney Joyce heroine Rhyds Mystique struggled to find for pressure on this occasion and it was the daughter of Lyons Danny, partnered by, according to interviewer Bill Hutchison, the youthful Michael O’Mahony who collected the purse.
Rhyds Hokey Cokey was an honourable second and certainly looks up to winning her fair share of races, whilst Chinatown Katie took third and Rhyds Mystique fourth.
The winning time was an impressive 2.00.8
One pacer who is in the form of his life is Rhyds Rock Star, an impressive winner of his heat, he clocked a sub two minute mile (1.59.9) in landing the 3-Y-O Colts Championship for driver James Haythornthwaite.
The winner has now won six races this term and who is to say the winning has not finished yet?
No Brakes is another pacer with a future after a decent second place effort here, with another useful type Frankie Camden third.
Jessies Conquest was driven right out by Marc Jones to take the 4-Y-O Crown in 2.00.3, winning by eight lengths and booking a ticket for a possible excursion to Portmarnock.
Miraculous has a reputation for playing with the opposition and the 4-Y-O Colts/Geldings Championship win for the son of Arts Conquest and Another Mattie was a case in point.
Our hero won in a very steady 2.03.4 by three lengths and the same from Ayr Trooper and No Stoppin.
Roughly three hours later the mighty 4-Y-O was out again, this time the opposition, in all due respect, was a lot sterner in the Standardbred Sales Company Battle of the Big Guns which saw him having to show his true quality to beat the talented Lyons Mischief by half a length in 1.58.1.
Tarawood Messi finished third, Ayr Majesty fourth and Stoneriggs Mystery last of the five.
Early last winter a group of drivers from the UK and Ireland took part in an International Amateur Drivers Competition against their North American counterparts at Pompano Park, Florida.
On that occasion Richard Haythornthwaite and Chris O’Reilly both enjoyed success, securing a victory for the visitors.
So, it was now the turn of the North American team consisting of Tony Dinges, Jeffrey Schaefer, Dennis Whittemore, Ronald Cusimano and Dein Spriggs to seek revenge on foreign soil.
However, it was the two winning UK/Ire drivers from the American leg who dominated the finish, with Haythornthwaite and Soldier Stanley wearing down O’Reilly and Itsmycheck towards the finish to win by a length in 2.02.0.
The next four places were filled by the North American reinsmen, with Dein Spriggs taking third with Rhyds Merlin, the intended drive of Jamie Davies, who kindly gave up the drive after Spriggs’ intended partner was scratched.
The other UK based drivers in action were father and son Patrick and Lee Morris.
The remaining race is to be staged at Aberystwyth this Sunday, which is sure to be a unique experience for the visitors having to race on turf.
Good luck to the North American team, all good sports, and well done to all concerned for the organisation of the competition.
The two Le Trot races for the 3-Y-O’s were won by two rookie trotters who are emerging as leading lights in this division, with the 18th heat of the championship going to Eviza Du Poitou, who caught the eye when third on her debut recently.
Driven by Mark Elvin, she trotted cleanly when making All in 2.10.4.
Heat 19 was won in virtually identical fashion by Eliothrope, who was following up his impressive Musselburgh success with a win by eleven lengths in 2.08.3.
Returning to the Breeders Crown, special mention goes to
John and Greta Wright, the Champion Breeders for the series for the eleventh time, Gareth Price, responsible for the Champion Broodmare Another Mattie, Alexis Laidler the Champion Trainer and Rocker Laidler for taking the Drivers’ title.
Due to the extremely classy nature of the races in this series, it is to be hoped that these Championship events may be awarded Group 1 status in the future.