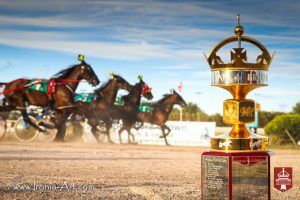 The competition is heating up for the Breeders Crown on the 28th July at Tir Prince. Two fillies from Scotland, Loose Change and Stash the Cash taking first and second in the mixed heat from the two colts Keir Camden and Simply Red getting through to the colts division. Moving on to Tir Prince, The Mockingjay winning from Lyons Queen and Springhill Kate winning from Imperial Deal. The two colts divisions were won by Christy Camden beating Oakwood Initowinit and Shadowcaster taking the honours from American Rebel . Over to Ireland and Portmarnock , which saw yet another mixed heat with the fillies yet again taking the honours. Newtown Jodi winning from Elski a recent purchase for the Kane family and from the two colts Oakwood and Springhill Travers. This is leading up to two exciting finals in the group one two year old divisions.