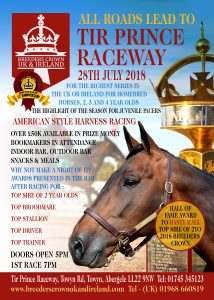 After 12 years of trials and tribulations the Breeders Crown UK & Ireland has finally come of age with a fantastic card of homebred juvenile pacers.

We’ve all witnessed memorable clashes before – the National Hunt had Kauto Star Vs Denman, the flat had Grundy Vs Bustino and now harness racing has Matticulous Vs Merrington Movin Up which will be held at Tir Prince this Saturday evening. Both are unbeaten this season and both have been purposely campaigned to avoid each other, but that all ends here at the Welsh venue when they go head to head for the first time. Trainer Alexis Laidler has publicly said that there has been nothing between them in workouts and it’s a coin toss as to what Rocker will drive on the night. This isn’t a two-horse race by any stretch and recent Irish classic winner Stakes On The Pan and Teddy Camden are also likely to make their presence felt.

As promoter Dave Wilson has highlighted during the week, theres more than just the Matticulous Vs Merrington Movin Up showdown to look forward to on Saturday night as its Breeders Crown Finals night with over £50,000 in prizemoney up for grabs over 10 equally mouth-watering events. Heats and Final will be held for the 3 year old fillies division and all eyes will be on the freak that is Robyn Camden. This Irish trained multiple record breaker looks to have this classic at her mercy and Saturdays contest represents one last chance to see her in action before she jets off to the US to continue her career against the best pacers in the world. 15 other fillies will be all out to lower her colours and of these Rhyds Sapphire, Rhyds Reflection, Lyons Attack, Wellfield Witch and Isabella Camden have shown enough form to give Robyn Camden a real fright.

The 4 Year Old Breeders Crown Colts Classic looks a formality on paper for current track record holder Rhyds Rock Star however recent Starmaker Series victor Father Ted has been improving in leaps and bounds this season and will certainly make his presence felt.

The 4 Year Old Fillies equivalent looks a lot more competitive and any one of the 9 runners could land the spoils here. Lyons Lememay and Rhyds Mystique were a pair of champion 2 and 3 year olds but both have failed to fire on all cylinders this season. All this could change on Saturday and it would be no surprise to see either bounce back to claim the £2000 first prize. Teatime Preacher, Olivia Camden and Borntorun are others to consider in this wide-open event.

The 2 Year olds are a golden batch this season both colts and fillies. £5000 is first prize for both divisions and with such valuable pots on offer these will be the most hotly contested of the night. In the colts Oakwood Inittowinit, Christy Camden and Shadowcaster are fancied by connections to run big races whilst The Mocking Jay, Loose Change, Springhill Miss Kate, Elski and Lyons Queen are the ones to watch in the fillies final.

With a couple of Le Trot contests also scheduled to complement the Breeders Crown Finals, the night features something for everybody so don’t just sit at home and pray somebody transmits some blurry Facebook live videos, make your way to Tir Prince to soak up the atmosphere, see old friends and be part of history. Saturday is guaranteed to be choc-full of “I was there” moments. Don’t miss this meeting under any circumstances.