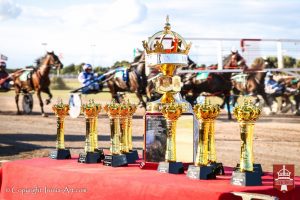 Well, it’s only one week to go until the richest series in the sports history for homebred pacers takes place at Tir Prince Raceway.  Saturday 27th July…mark it in your diary as this years racing is not to be missed!

The prize money is up for all the divisions this year with an increase from £50k to £60k plus, with a total pay out since the Breeders Crown conception of £410,000. The races are looking competitive, more so than last year. Both the 3YO Fillies and 3 YO C&G divisions will go to heats subject to our conditions, and for the first time ever in the Breeders Crown, the 4YO Mares with go to 2 heats, leading to the largest payout for 4 YO Mares in our history of running the Breeders Crown.

Not only are the 4 Year Olds looking strong this year, but they have attracted recognition from STAGBI by being awarded the Breeders Premium Bonus of £500 split between the 2 divisions

I am looking forward to what promises to be the most competitive ever in the Breeders Crown history. I am also looking forward to catching up with old friends and meeting new ones. Don’t be frightened to introduce yourselves to Jacqui and I. It’s nice for us to put a face to the name and voice of the people we speak to on the phone.