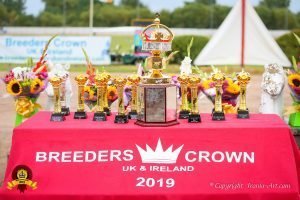 It rained relentlessly for 24 hours, but as if by magic it stopped just before racing was due to start. Nothing short of a miracle! It was the biggest crowd Tir Prince has had this year so far, and they were not to be disappointed as the racing was second to none. The prize money was the highest that the UK or Ireland for juvenile home bred horse. A full report for all the races to follow shortly.

Go to our results page for more information.