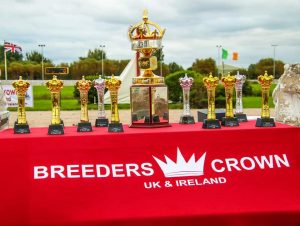 As the dust settled at the end of breeders CROWN night at tir prince raceway on Saturday 29th August, one thing had become crystal clear. The stallion FORECLOSURE has now joined the ranks of the all-time great studs to have stood in the UK and Ireland.

Fitting then that race 1 should be won by the aptly named 2yo filly OAKWOOD ANABELLA (Foreclosure x Carmel Camden) on her first visit to the track and only her second lifetime start. Driven by Vicky Gill the two year old filly exploded from post position 6 and was five lengths clear by the first turn. By the time she entered the long back straight the race was over, and the only question now was how fast she would go…2.02.1 was the answer, just missing the track record. What an opener.

Race 2 saw another Foreclosure winner. Driver Bernard Nicholson sat with the confidence of someone who knew much more about the 2yo colt, CHURCHVIEW FRANKEL (Foreclosure x Lyons Flum) than anyone else present and he was right, produced on the outside turning for home he coasted over the line in an impressive 2.01.9

Ayr standardbreds have continually produced stakes fillies of the highest standard and 2yo filly AYR CONTESSA ( Armbro Deuce x Ayr Queen) continued that tradition in race 3. Excellently conditioned by T. Haythornthwaite and driven by her son James, Contessa is now a perfect 3 for 3 with £7,300 in the bank.

Bernard Nicholson’s dream night continued in race 4 when 3yo filly CHURCHVIEW NICHE (Foreclosure x Meadowbranch Niche) returned to defend her Breeders Crown title. Holding off the fast closing ALLBETSAREOFF, NICHE won by 1 1/2 lengths in 2.01.4. Giving Bernard Nicholson a Trainer/ Driver double on the night. And Winner number 3 on the board for Foreclosure.

Not to be outdone James Haythornthwaite also notched a driving double when he produced 3yo colt STAR ATTRACTION (Yankee Lariat x Judy Hall) with perfect timing to take the glory from WHICHGUYAMI.

Now under a beautiful red sky sunset we had the perfect setting for a fairytale and race 6 provided it. Steve Lee’s continues to roll back the year’s and led out from the 1 hole driving Walter Stewart’s 4yo Gelding LADYFORD DOLLAR ( Forafewdollarsmore x Ladyford Ideal) who was also defending his Breeders Crown title, setting perfect fractions Steve saved just enough to hold off the late charging GDS KING. Walter stood in the winner’s enclosure like a proud father holding the son of his former champion FORAFEWDOLLARSMORE as he was crowned 4 year old colts and gelding winner.

All stage managers are taught to save the best for last but now the large crowd began to wonder what racing manager Eric Witherspoon could produce for a finale. In two words NEWTON JODY (Foreclosure x Onyx Killean)

Vicky Gill fired the 4 year old filly, who was BHRC 3yo filly and BHRC Horse of the year in 2019, from the 6 hole like something from a cannon and quickly settled her into a relentless pace. Past the three quarters pole Vicky now looked like she was in command, and then drew the gasps from the crowd as she started to go through gears on the last turn to win in a romp, recording the fastest time of the night 1.57.5  A New Track Record for 4yo fillies!

Congratulations to all winners and their connections.

The mood of the evening was captured perfectly by the BHRC, as chairman Darren Owen and director Jim McInally presented BREEDERS CROWN UK & IRELAND supremo David Wilson with a magnificent trophy to mark his lifetime achievement award. David’s acceptance speech was humbling as he reflected on a lifetime in the sport and what it had meant to him.

To put some context to his award just ask yourself how many times a year you can attend a race meeting in the UK or Ireland with 7 races and £53,000 in prize money.

Written by Mandy Stanley on behalf of BHRC