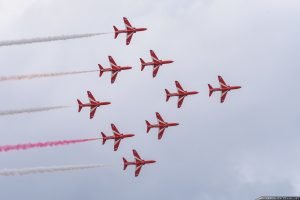 The 2022 Breeders Crown Uk & Ireland got off to a flying start with a fantastic aerial display and fly past for the Red Arrows who happened to be part of the Rhyl Air Show. That wasn’t the only flying at Tir Prince that the crowd was to witness on the night.

The first race of the 3YO fillies heat 1 for a purse of £875 went to Louisiana (Sweet Lou/Player Hanover) in 2.01.6, and the second heat went to Coalford Sunshine (Coalford Laag/Coalford Dawn) in 2.03. The final was held later in the evening for a total purse of £14,300, with victory going to Louisiana in a time of 1.59.9 and Coalford Sunshine coming a close second in 2.00.2.

The 3YO Colts and Geldings also had heats to run before being put through to the final, with The Professor (Arts Professor/Panne Ala Vodka) taking the first heat in 2.03.1 and in the second heat, Rhyds Scoudrel (See and Ski/Rhyds Hasty Affair) in 1.58.5, and Ultimatum a close second in 1.59. This was only the start of the sub 2 minute races. and the final of the 3 YO Colts 7 Geldings proved to be something special with no less than 7 out of 9 runners going in less than 2 minutes with Rhyds Scoundrel improving on his heat time by coming home to win in 1.57, proving that breeding is getting better and along with it, times getting faster.

The 2YO Fillies Final for a total purse of £8,000 was won by Maid Sweet (Seet Lou/Maid Of The West) in a time of 2.03.7 with Oakwood Lucy Lou (Sweet Lou/Capri Hanover) came a close second in 2.03.8 with only half a length between her and the winner.

In the 4YO Fillies Final, Bob and Shane Lee strong supporters of the Breeders Crown made it third time lucky for Indianas Quest (Arts Conquest/Ladyford Indiana) by getting the well deserved win in a time of 1.57.9 and taking home the trophy and £3,000 prize money out of a purse of £6,250

The 4YO Colts & Geldings gave no surprises if you have been following this horse through its juvenile career. Churchview Frankel (Foreclosure/Lyons Flum) did it again in his last race with the Breeders Crown in a time of 1.58.4 making him only the second horse along with Miraculous to win in all 3 age groups.

We are now making plans for next year’s event with yearlings now being taken to enable them to race in 2023 Breeders Crown UK & Ireland. So don’t miss out in this rich home bred series and get your yearlings nominated before the year is out.