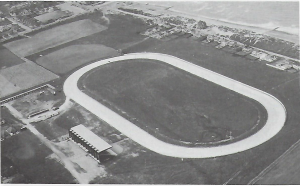 It was the first Futurity for 2 year old pacers.

It was  the first race over a mile for 2 year olds behind a mobile starting gate.

It was the first race to be held for 2 year olds bred by  in-transit stallions from USA standing in the UK on their way to Australia and New Zealand, the first of 24 being Newport Chief (Chief Abbedale/Home Girl by Volomite).

There were 2 heats for the Prestatyn Futurity, the first being held on Tuesday 28th July 1964 for a purse of  £100 split in to 4 (£65-£20-£10-£5). Previously some of these 2 year olds had run in heats and final of the George Lucas Cup run over 6 furlongs which was decisively won by Moorside Chief (Newport Chief USA), trained by a young man of 15 who was too young to be allowed to drive at Prestatyn. The trainer was Ian Pimlott, driver Jim (Pick) Pickard and owner & breeder Edmond Dodds. The other heat was won by Ta Ta which was trained and driven by John Blissett, another youngster at the time. Ta Ta was owned by Joe Hill, a newcomer to trotting along with his son Tom who has since made a name for himself in USA by Buying, breeding and racing some of the best standardbreds in the world.

For more information and the results of the final, come back next week for more memorable moments!