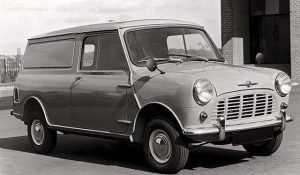 People now are apt to take 2 year olds for granted. There is a lot of work goes in to rearing a foal up to when it is capable of racing as a 2 year old.

In the sixties, 2 year olds did not have the same natural ability as they do now. There were the odd few that did but few and far between. To see these 2 year olds competing and doing everything right was a sight to behold. Some had to be coaxed up to the gate, while others had to be chased in order to get them started with their heads held high in order to keep them pacing, or at least that was the theory (something I never agreed with).

Moorside Chief had to be chased on to the gate, I seem to remember but not sure if this was in the heat or the final. Anyway, he was the hot favourite at 1/3 on. He made a skip going away and lost the race there and then. Ellen Mary, Edmond Dodds other entry won driven by Clem Dodds.

In 1964 the cost of a Mini Van was £495, a gallon of petrol was the equivalent of 22.5 new pence (4 shillings and sixpence). The average weekly wage was £16. Standardbred trainers charge for a horse per week was £7. Prize money for UK tracks prior to Prestatyn was approx £100 per meeting for heats and final. Prestatyn prize money at the beginning in 1963 was £1,000 plus split between individual races. The average cost for a horse before Prestatyn came along was £100. The price of horses rose dramatically after Prestatyn opened its gates and the first expensive horse was Samuel, DOB 1956 (Hurricane/Don Hanover) and cost £1,000, was bought by Matt Miller. The next horse was Young Morecambe, DOB 1956 (Rexo/Lady Lynn) also bought by Matt Miller for £1,200, and the third horse to make big money was Cheerio, DOB 1959 (Hurricane/Don Hanover), bought by Joe Hill for an amazing £1,500. Prior to going to Prestatyn all these horses won the Famous Musselburgh Pace. People started breeding with the in-transit stallions and this was the start of an industry.